The FRAUD at GBGD by VAN KRIKORIAN Continues

November 04, 2017
Global Gold Corp (PINK:GBGD) is $20,917,023 in debt, so what does Mr. Van Krikorian, the President, CEO and Director of the Company do? He conspires with his fellow directors and officers of the company to reclassify $6,463,255 of that debt, which is owed to them, as secured promissory notes, to the detriment of its other creditors and secured creditors.

Van Krikorian announced on November 1, 2017, in the company's June 30, 2017, 10-Q report, that these secured promissory notes were issued on July 1, 2017, and interest and principal were due on September 1, 2017. What was the security granted to Mssrs Van Krikorian, Drury Gallagher, Ian Hague, Lester Ceasar and Jan Dulman? Everything. And now these newly issued secured promissory notes are in DEFAULT. 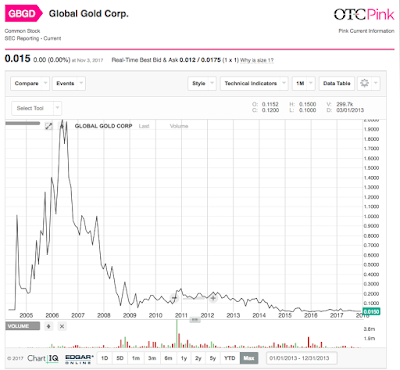 These officers and directors have been involved with the Company almost from the beginning where the stock climbed to a high of $3.80 in May 2006 and now rests on its deathbed at $0.015.

The strange thing about this transaction is that the assets of the Company were previously pledged to CRA on $2.2 million in Secured Fixed Rate Convertible Notes issued in 2012 and guaranteed by GBGD. But scorpions are scorpions and GBGD declared the $7 million in equity investment and loans that GBGD received from CRA for its Toukhamnuk Gold Mine as a fraud, kicked CRA out and signed a new deal with Linne Mining and Industrial Minerals in 2013.

After defrauding Linne Mining and Industrial Mineral out of $5,956,028 Linne is now suing GBGD's subsidiary in bankruptcy court in Armenia for USD$39 million.

In response to all these debts and bankruptcy threats, Mr. Van Krikorian conspired with his fellow officers and directors to secure all the assets of the Company in their personal names to take all the benefits for themselves, while leaving behind an empty shell of broken dreams, promises and debt.

Popular posts from this blog

May 18, 2017
As of TODAY, May 17, 2017, Global Gold Corp's shares have been demoted to the PINK SHEETS, labeled as "SEC Reporting Delinquent", "STOP OTC Pink no Information" and with a public Warning! This company may not be making information publicly available. According to the OTC Markets website, the STOP warning means: No Information Indicates companies do not provide disclosure. Publicly traded companies that do not provide information to investors should be carefully researched before making any investment decision.
Read more

June 19, 2017
Global Gold Corp (GBGD) shares have finally been re-listed on the OTCQB from the PINK sheets. GBGD shares were dropped because it failed to timely file their year-end and quarterly financial statements. Now that the F/S are filed, here are some highlights for GBGD: The company has $54,164 in cash and $20,350,985 in debts Its Armenian subsidiary (Mego Gold LLC) that owns their Toukhmanuk Gold Mine has been declared bankrupt by Armenia's Cassation Court JV partner Linne Minning at Toukhmanuk, has filed a creditor claim of $30,000,000 in the bankruptcy of Mego Gold They need $5,000,000 to fund their Marjan Project in southern Armenia What can one say about a company run by Mr. Van Z. Krikorian , President, CEO, Director and  Lawyer, and Mr. Ian Hague , Director and Principal of hedge fund Firebird LLC (www.fbird.com)? Mr. Ian Hague had made director loans to Global Gold which amounted to $5,052,262, including interest. In order to clean up the books of the company, in
Read more

Bill Mavridis
Not a fan of Van Krikorian's business practices.